Moissanite is a lab-created colorless to near-colorless, extremely durable jewel with brilliance and fire that outshines even diamonds. It is a popular alternative to more expensive diamonds. It has a hardness of 9.25, harder than sapphires and emeralds and only topped by diamonds.  Unlike diamonds, which are carbon, Moissanites are silicon carbide (SiC), a very rare, naturally occurring mineral found primarily in meteors. Charles & Colvard's Forever Classics were the original moissanites with a J-K color grading. In my option their warm color nuance looked great in colored metals like yellow and rose gold. Forever Classic and Forever Brilliant moissanites are discontinued and current stock only available until it sells out. Please note that all Forever One moissanites come with a Certificate of Authenticity and limited warranty by Charles & Colvard. Stuller moissanites do not come with any certificates or warranties for the moissanite.

Can you spot the difference between a moissanite and diamond? Check out the video below. They look almost identical.

Top: 5mm colorless Forever One moissanite vs a 0.55ct/5.25mm H/SI1 excellent cut diamond on the bottom

Learn how Moissanite compares to diamonds and white sapphires

Selecting the right size of moissanite for your ring:

It is more common to refer to moissanite sizes using actual dimensions in mm instead of using carat weight more commonly used with diamond sales.

A diamond and a moissanite of same cut, shape and dimensions will not weight the same. Moissanite's gravity is about 13% lower then diamonds. Moissanites they are typically a bit lighter than a diamond of same size dimension. A diamond's actual dimension can vary widely depending how the stone is cut. Some diamonds are cut shallower, some have more depth. More depth means more weight, but not a bigger diamond if viewed from the top. For instance a 2ct round diamond can measure anywhere between 7.5mm to 8.5mm. Two 2ct diamonds seen next to each other can look very different in size. The faceting and cutting of moissanites is regulated by Charles and Colvard for the Forever stones and by Moissanite international for the Supernova moissanites. They are all cut to the ideal dimensions to bring out the maximum sparkle and fire. Commercially available Moissanites don't show the same size variation diamonds can have. That's why moissanite are better described in mm sizes instead of weight. In my opinion all gemstones should be rather described in actual dimensions and not just weight, which can vary too much from stone to stone. After all in the end what you see is the actual dimension of the stone and not the weight of it. Care for your moissanite:

Moissanite are rated “excellent” for everyday wear. Due to their Moh's hardness of 9.25 they are very scratch resistant but can be scratched by diamonds. Avoid any hard knocks as they can be damaged  and chipped.  Avoid exposure to heat and contact with chemicals. To clean, gently scrub with a soft toothbrush and a solution of mild dish soap and warm water, rinse well and dry with a lint free cloth. Or clean in an at-home ultrasonic unit. More jewelry care info is available here.

My fiancé wanted a wedding ring that matched my sapphire engagement ring. I wanted to give him something that not only would he like, but would also express our aspirations for our marriage. This ring fit the bill perfectly, with the sapphires reflecting a beautiful life together , the random pattern reflecting the vicissitudes of life that we will face together, the multiple stones long years together, the platinum a strong and enduring bond and the satin finish acknowledging that it will not always be perfect and shiny.

I was afraid it might not look masculine enough for him, but he absolutely loves it. I think the wider band and satin finish help with that. I catch him admiring the ring on his finger sometimes!

And Konstanze was a dream to work with, clearly explaining that the smaller stones set flush with the band meant they would look darker and not sparkle so much as my larger, prong-set sapphire and working to match the shade of blue in the stones. She communicated very clearly about production and shipment time and sent the ring beautifully packaged.

I would definitely order here again and recommend to anyone looking for an engagement ring or wedding band, especially if you want your ring to be personalized and made by hand in the US.

I looked at a LOT of rings for my anniversary wedding set and kept coming back to this one. The checkerboard cabochon cut of the stone is so unique. It looks wonderful with the wave wedding band. Love it, so glad to have found Nodeform!! 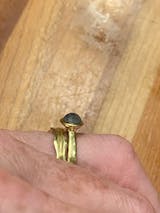 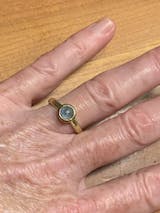 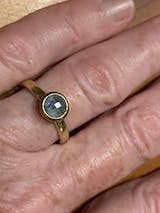 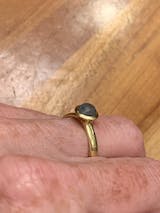 Very small earrings and the stone is tiny. It took a long time to get them. Definitely not worth the price or the wait. 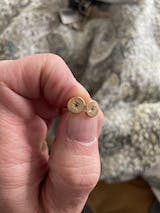