Morganite is a member of the Beryl family. Other beryls are Emerald and Aquamarine. Morganites come in pink colors from a pale pink to peach and salmon. It is less brittle than Emerald, making it a desirable gem for special occasion wear.

Morganite was first discovered in California in the early 20th century and later on also in Madagascar. Though there are also small deposits in Brazil, Mozambique, Namibia, Afghanistan, and Russia. But quality morganite remains relatively rare. Like most colored gemstones morganites are graded on a letter scale.

Morganites soft pink colors range from peach, peachy-pink, pink, and violet pink, as well as a pretty salmon color. The more saturated the color, the more valuable the gem is. The gentle pink hue of Morganite is due to traces of manganese. Like almost any colored gemstone, morganite is valued first and primarily on the intensity and saturation of its color, followed by size and clarity. Morganite is rated “good” for everyday wear. Avoid exposure to heat, contact with chemicals, and protect from scratches and harsh blows. To clean, gently scrub with a soft toothbrush and a solution of mild dish soap and warm water. Avoid cleaning in ultrasonic or with a steamer as the gem can not tolerate heat and abrupt temperature changes.

Morganites have a hardness of 7.5 to 8. They are fairly scratch resistant, but will abrade over time if worn every day in an engagement or wedding ring. They may need to be repolished or recut after years of wear. Most morganites have been heated to improve their color, mainly to remove yellow or orange tones. Heating is a permanent enhancement, as lasting as the gemstone itself. Heated morganites can be re-cut and re-polished if needed without affecting it's color hue.

See morganite rings I have available on my website here.

LOVE the salt and pepper diamond mini bezel studs! They are just the right size for everyday minimal wear. They are tiny enough that would wear well in a second piercing too. I’m allergic to silver and gold so I was excited to see these available in platinum - thank you Konstanze for making stylish platinum earrings!

A very beautiful and unique handcrafted ring. The stone is brilliant and the fit is perfect. Exactly what i wanted and exactly what i got. Konstanze is truly easy to work with and does beautiful work.

My fiancé loves his wedding band! It’s such a unique, high-quality piece. I got him the shiny polished finish to match my ring and it’s gorgeous. 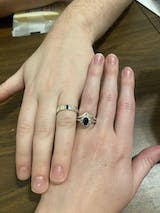 My wife loved these. Perfect size and matched perfectly with the other rose gold items she's gotten from Nodeform.
I've ordered her multiple items over the years, including our wedding rings and engagement ring and we've always loved everything. A truly fantastic business.