Last week this trillion Morganite ring in palladium sold and got finally completely finished up. 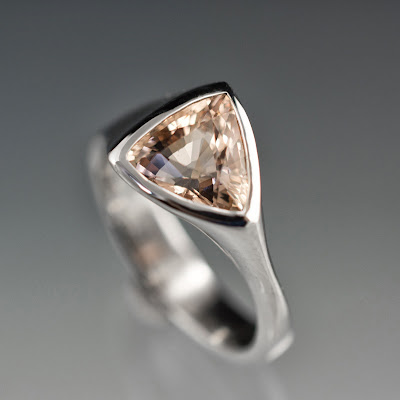 I made the palladium mounting for the genuine stone over a year ago and had left the gem unset to allow for some easier sizing. It sold and only needed to be enlarged 1 size up, which was possible by just hammering the shank. Not something that would have been that easy if I had completely set the stone in the setting. It would have been too much stress and risk of stone damage. I don't usually like to hammer much on a shank when a stone is already set, especially one with sharp corners. In those cases I usually opt to cut the shank and laser a little insert in to bring it up to size. Glad it worked out without having to do that. It was nice to finally be able to set the beautiful peachy Morganite in it and make it all pretty. 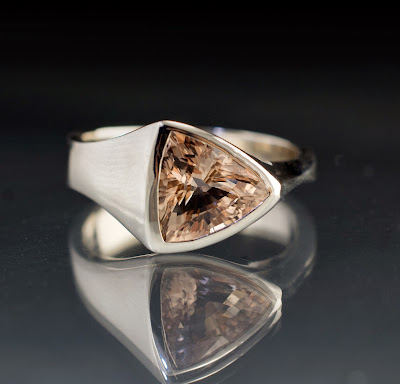 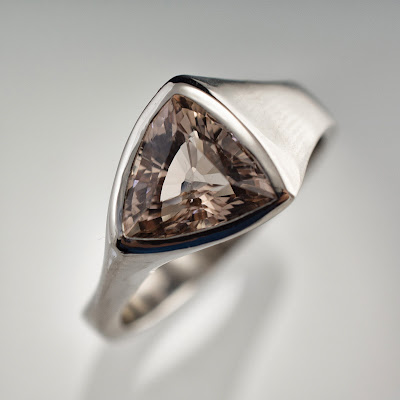 I will miss this little sparkler. So sad that I don't have another gem like this. I will keep my eyes open if another nice trillion Morganite will cross my path again. 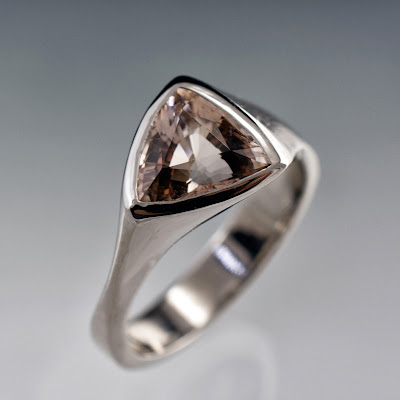 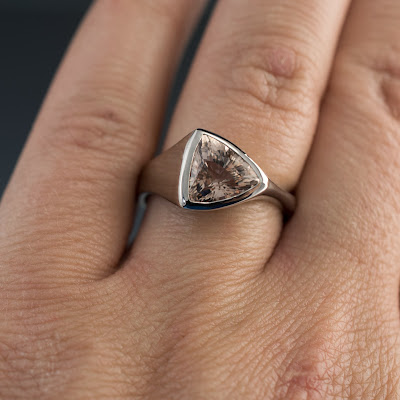 I also got a new Camera last week :-D
Finally upgraded from my 8 or 9 year old Nikon D50 to a Nikon D7100. Yes, I am a Nikon girl. I don't even consider anything else. Good thing is: all my lenses still fit, I only needed to invest in the new camera body.

This was the first ring I shot with the new camera. Still somewhat similar overall since I was used to using manual settings for years.  The new one has way better picture resolution ( 24MPX vs 6MPX), which helps a lot when cropping my photos. Downside is the image files are huge and my computer needs a cleaning badly.
The autofocus with the D7100 is nicer and quicker and it has a larger range of aperture settings when working with my 40mm macro lens. This is great to archive a blurred background with just the sharp focus on the front. Gotta play with those settings a bit more.
It does have video too, but I am not sure yet when I will use that. Well, it's good to have it as an option.

The bad thing was that I apparently also needed to upgrade Photoshop. My old camera raw software was not able to open the new Raw files. Maybe there is a way around it by just getting the Raw manager from Nikon directly. I did not realize Adobe switched to monthly subscription only and does not seem to sell just the software anymore. Could be more expensive over time. But on the other hand always having the latest version is not that bad either. I did not recognize much of an improvement of the new PS CC version over my old CS5, at least not for the few tools I only use. I still have a few weeks with my trial version before I need to commit. Maybe I find a cheaper way and keep working with the old PS. I know there are other cheaper photo editing software available, but I somewhat like staying with photoshop. A few of this week's A splash of ocean co Sign up to get the latest on sales, new releases and more …

I love my engagement ring. It is stunning and truly a piece of art. 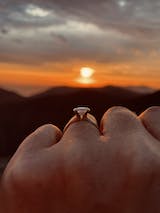 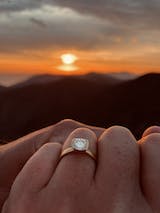 My trillion Moissanite stud earrings exude an understated elegance. The bezel setting frames the dazzling stone, which is the perfect size for everyday wear.

L
Round Green Moissanite Stone Laura C.
above and beyond

I cannot say enough about how much I appreciate Konstanze's craftsmanship and customer service. My husband bought my engagement ring nearly three years ago from Nodeform and had to ask for some special requests during the buying process. Konstanze was extremely helpful and patient. The hoops my husband had to jump through to get this ring is one of the reasons why it is incredibly precious to me. So when the green moissanite chipped, I was heartbroken. I found a similar one on Konstanze's website recently, and she guided me through which one to buy that would fit the existing setting and answered all of my questions almost immediately. It was her awesome attention to detail and customer service that brought us back to her. I really cannot thank Konstanze enough and can't wait to have my gem replaced and ring back on my finger again. Thank you! (Attached picture is of the original engagement ring and green moissanite. :-) ) 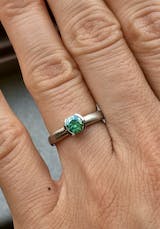 Konstanze did an amazing job on this ring. She has amazing attention to detail and customer service to create a stunning custom ring. It looks even better in person than the photos. The subtle grey moissanite changes colour in different lighting from a very subtle to more obvious grey hue. Thank you for a ring I will cherish forever.