I finished one prototype for a charm with some engraving. This is the first one realized from my previous sketches. One half of the charm was engraved with some wavy lines and the other side was has a matte scratched finish. Where those 2 meet I added some 18k gold accents, one of which is a tube setting with a 2mm moissanite. With the jump ring soldered closed it works well as a necklace charm as shown below. With an open jump ring it could be used as a bracelet charm. This is my first prototype  figuring out some sizes and overall design for the Etsymetal Charm Swap. I opted for metals I am more familiar working with. But I think the charms for the swap will rather use brass than gold. I first engraved  it flat on some sterling sheet since negraving on a flat surface is a lot easier than on a curved one. Then cut the 18.5mm disk out, domed it with dapping tools and then soldered the gold accents and jump rings on. After soldering I had to clean up the engraving a bit again where some solder flowed into some lines. (Note to self: protect those the next time with some white out. while soldering to prevent overflow)

I also did oxidize it to see how the charm looks in black and if the engraving texture still comes out nicely. It's pretty both ways, white or black. The engraving clearly still needs work to look more even and controlled. But I am pleased so far and think this is going in the right direction. I love the play of light reflecting on those bright cut lines. I hope to find some time this weekend to shape and sharpen a few different gravers and see how each works with line patterns. Then try a few of the other designs from my sketches. I will probably list a couple of these explorations as necklaces for sale in either my Etsy shop my web site. Pros of an Half eternity ring Why Choose a Pear-Shaped Engagement Ring? Got this for my husband. He's never worn jewelry before, and he really enjoys the satin hammered texture, and the 5mm is comfortable on his hand. Definitely exactly what he wanted for an everyday ring. Thank you Konstanze!

This is the third purchase from Konstanze, and each time I have not been disappointed with the quality of the product and amazing work put into each of her lovely creations. With these Montana Sapphire studs, she's captured the sparkle of the matched stones set in a well thought-out setting. Further, she answers any queries almost instantly; and shipping is fast.

I wanted a new ring for my 25th, and for my 27th I got it (thanks COVID). I spent so much time looking for the perfect ring, a mixture of classic and organic. Not an easy thing to find but Oh I Found It! The Stella band is just perfect, the workmanship is so good in excellent! I spent this weekend standing outside twisting the ring round and round to see all the sparkles! This will not be my last purchase. Thank you for my perfect ring!

I got the ring in platinum with satin brushed finish. The 3 mm width is perfect for my size 9 finger, wide enough to make a statement but still sweet and feminine. The platinum feels hefty and solid, and the satin hammered texture feel so down to earth and has such an elegant sheen to it. The alexandrites have a cool green sparkle during the day that you just can't see in pictures or videos. They add a special magic to the ring that just feels like love. I planned to wear only this as a wedding ring, but I'm so enchanted with the the alexandrites I might get a solitaire ring to go with it 🙂

Thank you Konstanze for my forever ring, I couldn't have made a better choice. 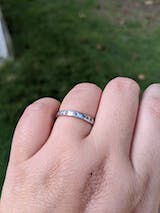 This ring Konstanze made is impeccable. It is absolutely stunning and I can't tell you how much I love it and how much it means to me to have a truly one of a kind stone in such a gorgeous setting. It literally hurts my eyes a little bit in certain lights from the sparkle and shine, lol! Thank you for the attention to detail and effort for perfect you put into this ring. You are fantastic!! 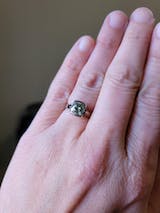